How to Prevent Birds from Hitting Windows

Every year, thousands upon thousands of migratory birds pass over your house—twice. Birds migrate once in the spring and once in the fall. Along the way, they have to navigate quite a few obstacles, and too many of them are humanmade. Windows can be one such obstacle. Thankfully, there are solutions. Today, we’ll be taking a look at how window films can prevent birds from hitting windows. 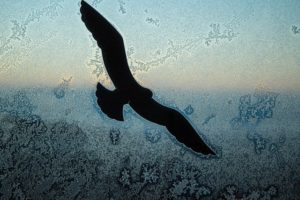 Have you had birds collide with your windows? Decorative or solar films could be the solution.

Why Do Birds Hit Windows?

Birds collide with windows all too often during migration. Often, they are momentarily stunned but recover before long and can fly away. Other times, these collisions can be fatal.

Birds collide with windows because glass is not present in the natural world, and it can be pretty confusing for them. After all, it looks like regular old air they would be able to fly through. This issue can be compounded when windows reflect the blue of the sky.

One of the first instincts people might have is to use reflective films to prevent birds from hitting windows. But reflective films may actually make the issue worse. This is because of the problem we mentioned earlier; when windows reflect the sky, it can cause birds to fly into them. Then there is the fact that birds may ‘attack’ their own reflection in the glass.

Instead, non-reflective window tinting is a better solution than reflective films. Still, even tinting isn’t perfect. You may have noticed that light is still visible from the outside of a building at night, even with window tinting. You might think that birds aren’t active at night, but the truth is that many of them migrate after dark with stars to guide them.  Some birds may collide with your lit window at night.

Some people take to putting tape or stickers on their window, which effectively deters birds, but is unsightly. A more elegant solution is decorative window film. The advantage of these is that they remain effective even when the interior of your home is lit at night.

When it comes to decorative window films, the sky’s the limit in terms of customization. People have used these films to imitate stained glass or frosting on a window. One downside of these films is that they do make it difficult for you to see outside. If that’s something you don’t want to give up, non-reflective window tinting might be the better option.

This entry was posted on Thursday, December 17th, 2020 at and is filed under Decorative Films, Residential Solar Tinting . You can follow any responses to this entry through the RSS 2.0 feed. You can leave a response, or trackback from your own site.